Similarities Between Bitcoin and Bitcoin Cash

Bitcoin is a cryptocurrency in the form of electronic cash, while bitcoin cash came when developers, to improve the scalability of Bitcoins, prepared a code change. This is known in the world of crypto, as a hard fork. Even so, the company provided reassurance that every user, who had any money during the transfer would be able to keep their money intact.

Bitcoin and bitcoin cash is more or less the same thing barring a few minor differences. The total supply of both the coins is the same at 21 million and the amount of coins, being circulated is also almost identical with bitcoins standing at 16.75 million coins and Bitcoin Cash at 16.87 million coins. Both BTC andand  use a proof of work (PoW) algorithm, the Secure Hash Algorithm – 256 bit.

Proof of work is a protocol whose main goal is to prevent cyber attacks like a Distributed denial-of-service attack (DDoS) which basically exhausts the resources of a computer by sending multiple fake requests. This concept had been, there even before bitcoins, but Satoshi Nakamoto, applied it to digital currency, thus revolutionalizing  the way traditional transactions work out.  It allows trustless and distributed consensus. It uses the Secure Hash Algorithm – 256 bit

Both  Bitcoin and Bitcoin Cash are both collected through a hardwares like ASIC miners.

In 2017 it was evident that there were already too many transactions to handle and some reform was required in order to allow Bitcoin to scale further. 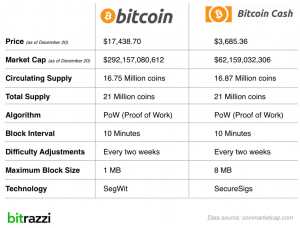 Bitcoin was the first and probably the most well known cryptocurrency, which functions on a peer to peer basis and is fully decentralised with no central bank and zero involvement of the third party. Bitcoin Cash also functions mostly in the same principle. In fact, the Bitcoin Cash is a continuation of the Bitcoin project, which was created on 1st of August, 2017.

Rishma is currently pursuing a bachelor’s degree in International Relations and has a special place in her life for sifting through all sorts of random trivia, thank you very much.