Bitcoin Cash has been on a free-fall in the market trends after the news of a lawsuit against Roger Ver for Hard-fork manipulation came to light. In the latest development, the turmoil seems to have dethroned BCH from its 4th spot regarding the market cap. BCH lost its position to Ethereum during the early morning hours of Monday 17 December. At the time of writing Ethereum was trading at $86 while BCH at an all-time low of $81. 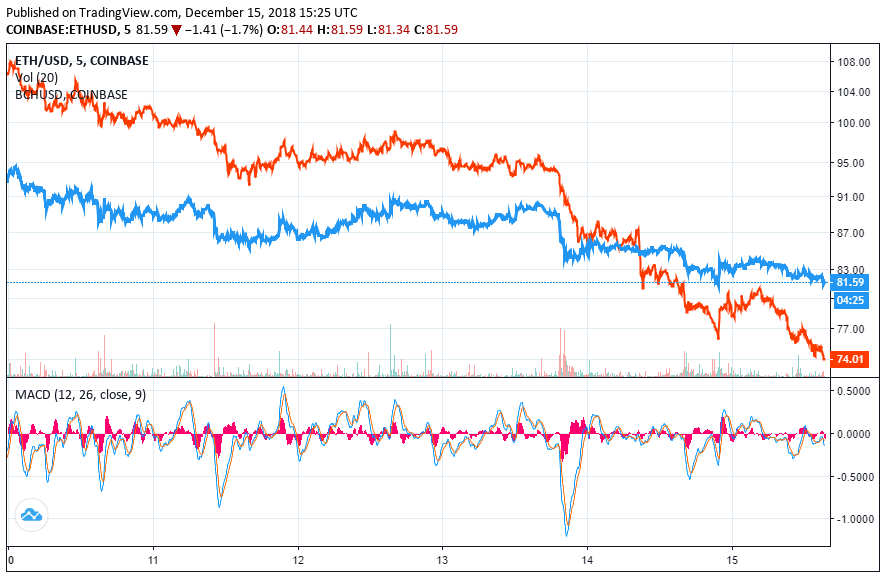 The post-hard-fork war between the BCH ABC team lead by Roger Ver and BCH SV team led by Craig Wright has been seen as a catalyst for the Crypto winter and bearish trend in the market.

The infamous November 15 Hard-Fork was a little different from the earlier forks, as it had two contenders for the primary currency rather than the usual one. Both BCH SV and BCH ABC were involved in bad mouthing each other on different platforms and declaring a Hash War. BCH ABC was leading BCH SV on major parameters like the number of blocks mined or the total hash power generated. Even major crypto exchanges declared their support for BCH ABC, making it a clear winner looking at the initial results.

However, BCH SV never lost hope and always gave a close fight to its competitor even after facing several hurdles in the form of self-block recognition, or losing the early Hash War. Craig Wright still maintained his alpha status, and finally, his predictions came true when BCH SV surpassed the ABC, both regarding market cap and trading value on December 7, amid the bearish trend of the market.

The unnecessary war of words and Hash power manipulation led to massive losses for the miners and going overboard invited a lawsuit for Roger Ver side. The end of Hash War came through an announcement which said that there would be a permanent split between the two, with different Crypto exchanges declaring their support either in favor of ABC or SV and in some cases both the parties.

The current bearish trends and legal troubles for Roger Ver have resulted in a loss of its market capitalization along with its position. BCH which started above $300 after the fork has come down around $80 mark while BCH SV which started above $100 mark is currently trading around the $76 mark.

Looking at the condition of the BCH network, it’s not hard to understand how fragile the crypto world is without a real-world entity backing it. The market is so volatile that the prices are dependent on word of mouth, and a fake rumor with enough reach can result in a complete breakdown.  The war of words highlight this issue even further as both the parties lost a significant chunk of their market cap due to bad mouthing. The unnecessary hash war inflicted heavy losses for the miners.

The people in the crypto realm must look beyond the price and trade value of cryptocurrencies and focus more on finding wider acceptability. The value of the digital currency would see such volatility unless it has better liquidity options and backing against an entity of the real world.

Bitcoin Slides Back To $8.5K

6 Central Banks Partner to Form a Working Group with BIS

China to rule the Blockchain market