The Elements of A Blockchain System

The various elements of a blockchain system are the ingredients of the storm that blockchain has cooked up in the world of modern technology. It has broken new ground and increasing numbers of companies have embraced this technology to make their work easier, smoother, cheaper and far more efficient than earlier systems. Companies ranging from tech giants such as IBM to finance behemoths like JP Morgan, companies have rushed to share in the many benefits of this technology. But what are the elements that make up a blockchain system?

Meaning and Basic Types of Blockchain

By blockchain technology, we refer to a system of a distributed ledgers that are controlled in a decentralized manner, democratically and by consensus among participants. Information contained in a blockchain database is largely secure, immutable and incorruptible which makes it extremely potent for a number of use cases.

Elements of a Blockchain System

There are three key elements of a blockchain system, namely: the consensus algorithm, the distributed ledger and the node application. 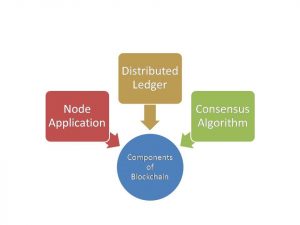 Consensus algorithm refers to the way in which a particular blockchain network decides amongst the members as to which transactions are valid and verified and should be updated on to the ledger. Since a blockchain system is essentially decentralized, there is no central authority present to validate transactions. The role of validation is assigned democratically based on some criteria that varies from one network to another. For example, Bitcoin’s Proof of Work takes into account which member has committed the most hardware resources to the upkeep of the system and to mining. Proof of Stake algorithms, on the other hand give validator roles to those with higher token holdings or stakes in the blockchain. There are many other consensus algorithms, like Ripple’s Proof of Correctness or Lisk’s Delegated Proof of Stake. The consensus algorithm is also responsible for deciding the speed of a blockchain network. While Bitcoin takes almost 10 minutes to process a block of data, Ripple takes only a few seconds.

The consensus algorithm is crucial for security because agreed upon transactions with their unique hash values make up the chain in such a way that every block has a remnant of the hash values of blocks preceding it. This creates a chain that cannot be dismantled easily by one or a few members.

This is the database or ledger of all the information that is being recorded onto the blockchain by consensus. This ledger can be immediately viewed and accessed by every single member of the ecosystem. This ensures incorruptibility as changes cannot be made unscrupulously when everybody has simultaneous access to all records. This is essential for traceability of records and for using blockchain in supply chains.

AirBit Club and the Rise of Digital Business During 2020