How Big is Ethereum Blockchain?

Also Read: 5 Ways To Mine Ethereum

Mr Alistair Milne, a Bitcoin trader, posted a very controversial graph comparison of the increasing size of the node. The picture below clearly shows that Bitcoin has a very smooth and linear graph of increase. However, Ethereum looks like high on caffeine and spike increases upwards in comparison.

Many traders and cryptographer have pointed out how flawed the graph is. Although true to a certain level, it masks significant differences in the background. For first, the number of transactions per day for Ethereum is 8,00,000 while Bitcoin is at 2,00,000 transactions per day. Both runs on the same 1MB transmit every 10 min. However, Etherum checks the transaction every block. On the contrary, Bitcoin does that only once every two weeks. The founder of Etherum was quick to point out the absence of understanding of their cryptocurrency.

How much space does Etherium Node take on a PC?

Etherum blockchain creator Vitalik Buterin has said that their blockchain has a capability called Pruning, which the non-users are not generally aware. This Prune allows the node to be not more than 50 GB anytime. So you can quickly become a node on the network by Pruning. All it does is cut the database to your computer and let you control the transactions without worrying about the increasing size of nodes. The database is capable of running a blockchain and synchronise from Genesis. 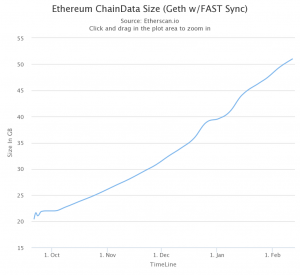 Genesis is the first block in the chain that got mined, so in the blockchain technology every transaction on the network are visible and verified via peer-to-peer reference.

The other reason given by creator is that, even though Bitcoin’s progressive rate is linear and Etherum’s a little complex, there is no real concern for a user to get worried. The creator is pretty sure that all these concerns were well taken care of while creating the cryptocurrency.

Is it possible to run a fully functional node on System?

The Short answer is Yes.

Long Answer: The nodal database on your computer is a fully functional node as it can perform the following tasks of a node very efficiently.

So, overall there shouldn’t be any concerns over the sate of Etherum node in the blockchain.