Bitcoin Cash is declining on Friday Nov 23, trading around $200.26. The bears have been active since Nov 7.

On H4, BCH continues its downtrend. After the test of the previous long term channel, the price moved to the lower projection channel. In the short term, the downtrend looks steady, with the immediate target lying at the short term channel support, $109.35. The resistance, meanwhile, is likely to be at the previously broken out support, i.e. $244.85. 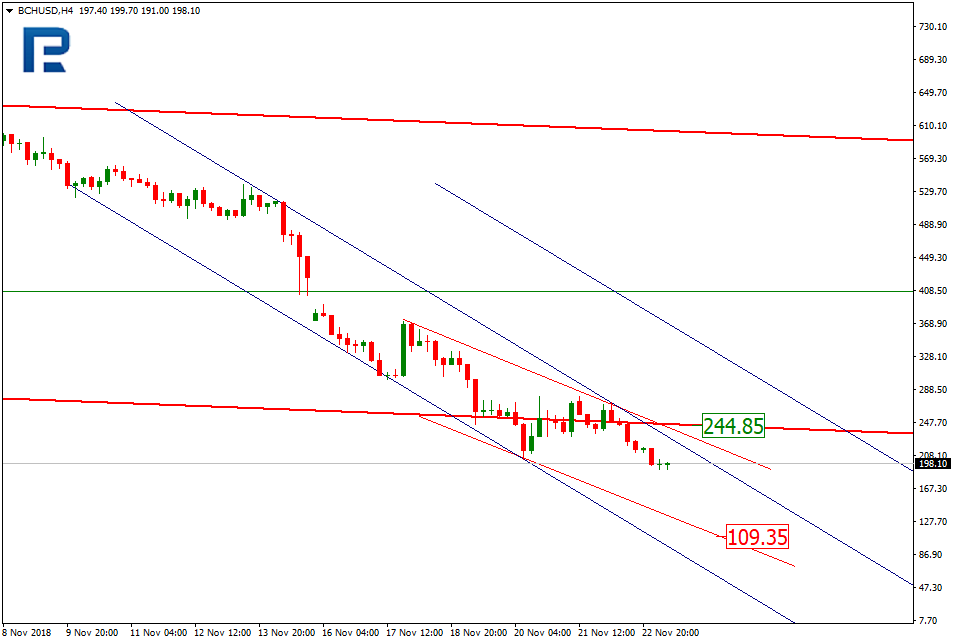 Bitcoin Cash hard fork occurred in mid November, but the result did not go in line with the expectations and is still mostly unknown. Technically, two new coins appeared, Bitcoin ABC and Bitcoin SV, with the former having more technology-based support than the latter.

The two unequal parties arose during the hard fork itself, when both dev teams offered their incompatible versions to the clients. The network then broke down into two, and the confrontation became evident at once. Right in the middle of the update Bitcoin SV devs attempted to attack Bitcoin ABC. According to the market participants, this is at least unsafe.

Currently, Bitcoin ABC is behind the original Bitcoin Cash ticker symbol, and it is around 5 times more expensive than Bitcoin SV.

Both parties have already commented on the situation and the outlook. Roger Ver, Bitcoin.com CEO, supports the original version of Bitcoin Cash and says none of the parties wants to completely take down the other, while both may suffer losses in course of this conflict.

Most crypto platforms are going the easiest way, supporting Bitcoin ABC. They are cautious towards Bitcoin SV and issue warnings to their clients with regards to the possible risks. How this conflict is going to be resolved and what it will mean for the entire crypto market, is still unknown.

Having majored in Social Psychology and Economics, I worked as a team lead of a tech and fundamental analysis lab in the Applied System Analysis Research Institute. I write financial articles for various international media. I also hold the position of a Chief Analyst at RoboForex.

The Numerous Particulars Directing to John Nash Being Satoshi Nakamoto