How Many Bitcoins Are there?

The total amount of Bitcoin that was created by Satoshi Nakamoto in 2009, is estimated to be around 21 Million. This means there is an upper limit and people cannot mine more than that. Out of these total 21 Million, around 17 million have been mined as of today. This number changes every 10 minutes as a Block gets mined. With every Block, 12.5 Bitcoins get into circulation. If we go by the current rate of Mining, a total of 21 Million Bitcoin will be mined by the year 2140.

Also Read: 5 Things to Know Before investing in Cryptocurrencies

Bitcoin as a digital currency has not only gained the attention, but it has been created by a genius who understood how supply and Demand chain works. For simplification, we can assume Bitcoin to be gold, which has a certain limit on its quantity. Just like Gold, it has to be mined (digitally). The most important part though, its a blockchain based currency and thus does not require any centralized authority to regulate it.

In case of Gold, the mining is physical, however, in digital mining, a user downloads a node on their computer and then through Peer-to-Peer check, they verify the calculations once a block gets filled. After all the transactions on a block get verified, the miner who came up with correct calculation gets a certain amount of Bitcoin as a reward.

What is Mining, and what are the Rewards?

Cryptocurrencies like bitcoin work on blockchain technology whose sole purpose was to cut any centralized form of authority. At this point, you might be thinking who regulates and verifies the transactions then? Well, the answer is ‘anyone’. Basically, anyone with a node(software database) on their computer can verify the transactions and earn bitcoins as a reward.

This process of Peer-To-Peer Verification is called mining. Once all the transactions on a block get complete, it sends out a message to all the nodes in the system. Now anyone, who can verify all the transactions, gets a reward. The reward was 50 BTC for the first 4 years (2009-2013). So, if you verify a block of transactions you get 50 bitcoin as a reward. This reward gets halved after every 210000 blocks or almost equivalent to 4 years.

How many Bitcoins are left?

As per the study by Chainalysis, a group that mainly works for building trust in cryptocurrency, has pointed out that a total of 4 Million of these Bitcoins is lost forever. However, there are still around 3.1 Million to be mined and the time limit is said to be around 100 years.

Bitcoin during its early days did not hold much value in comparison to nowadays. So, there have been many reported incidents where a person have said to dispatch 100’s of Bitcoin with their Hardware trash. Since the currency is digital, there are very much nil chances to recover those lost ones. 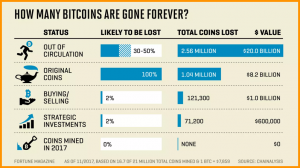 In case, you are new to the crypto world, we would recommend following different measures to make sure your Bitcoin is safe. Make sure you have multiple backups to draw out your money from more than one resource.