If one has ever wondered how to become a blockchain developer, chances are someone or some internet post has told him or her that learning the programming language Solidity might be a good idea. What is Solidity exactly? What are its use cases? To answer these questions, here we are discussing a very basic, beginner’s guide to Solidity and its use cases.

We already know that the Ethereum blockchain is possibly the most well-accepted and popular blockchain system for developing dApps and for creating ecosystems for a large number of use cases. Now, in Ethereum blockchain, one of the most common programming languages there is, is Solidity. It is meant for writing smart contracts in blockchain and also for implementing them within the blockchain networks or platforms. This language was developed by many core contributors of the Ethereum blockchain such as Liana Husikyan, Gavin Wood, Alex Beregzaszi and Yoichi Hirari. It is statically-typed in nature and is extremely simple to learn online and use for most people with basic knowledge of coding.

The language is all the more easy to learn for existing coders because it is built around the common ECMAScript Syntax, with variadic return types and static typing. It supports several complex member variables such as structs, hierarchical mappings, many type-safe functions and an Application Binary Interface (ABI).

An example of Solidity programming is as follows: 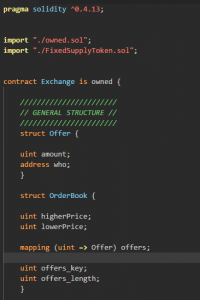 Solidity is commonly used in designing smart contracts that can be used in several ways. Some examples are as follows:

Granting of loans and disbursement of funds upon the fulfilment of a pre-set deal obligation can be made effectively automated using smart contracts written using Solidity. Mortgages, settlements, payments, insurance claims, paying the amount of a government bond upon maturity etc. can all easily be dealt with through the use of smart contracts.

Initial Coin Offerings become far more efficient if they utilize smart contacts written in Solidity on the Ethereum blockchain. Contributions to a token sale can be regulated based on the rules and framework of an ICO in an automatic manner using smart contracts. Similarly, in case of a DAICO (a combination of Decentralized Autonomous Organizations or DAOs with ICOs, as envisaged by Ethereum founder Buterin), smart contracts can control both contributions made as well as withdrawals made by the developers during a given period.

Use of smart contracts in Escrow Services, where a third party holds on to the funds till each party fulfills their end of the bargain, is becoming increasingly popular. This is because smart contracts eliminate the need as well as administrative costs of having middlemen. In addition, they also help do away with the possibility of human errors by automating the process.

Prediction Markets like Augur or Gnosis can use Solidity-based smart contracts to automate reward payments to people who predict results of a given event (like a football match or an election) accurately. Prediction markets can become far more efficient and convenient with the use of these smart contracts.